How to Configure Hudson to Monitor Test Coverage Stats

Goal:   configure a Hudson project so it will squawk if the test coverage stats drop below the current coverage levels.

I researched this a while ago, and perhaps this will spare a few folks some effort.

It turns out there are two separate conditions that are related:

1.  job states:    successful / unstable / broken / disabled
this is displayed as the color of the dot next to an individual build.

2.   job stability (weather icon):
"While a job may build to completion and generate the target artifacts without issue, Hudson will assign a stability score to the build (from 0-100) based on the post-processor tasks, implemented as plugins, that you have set up to implicitly evaluate stability."  These can include unit tests (JUnit, etc.), coverage (Cobertura, Rcov, etc.), and static code analysis (FindBugs). The higher the score, the more stable the build.


Now for the details about coverage metric settings:

If you go into "configure" on your project, and have "Publish (coverage) report" turned on, you'll see there are rows (in Cobertura, for things like "classes" "methods" "lines") and then there are three columns.  Here's what they mean:


My interpretation is the first two columns affect your weather icon (job stability), and the third column affects the job state (color of the dot by an individual build).

http://books.google.com/books?id=YoTvBpKEx5EC&pg=PA369&lpg=PA369&dq=hudson+setting+cobertura+coverage+metrics+targets&source=bl&ots=eJw1L5oit9&sig=6fnE54EDRICZsN6nNcYXKbF8cXQ&hl=en&ei=5wvCTOy3MYXEsAOn9dhB&sa=X&oi=book_result&ct=result&resnum=3&ved=0CCUQ6AEwAg#v=onepage&q&f=false
Posted by Naomi at 8:49 PM No comments:

Stopwords in SearchWorks - to be or not to be?

We've been examining whether or not to restore stopwords to Stanford's SearchWorks index (http://searchworks.stanford.edu).

Stopwords are words ignored by a search engine when matching queries to results. Any list of terms can be a stopword list; most often the stopwords comprise the most commonly occurring words in a language, occasionally limited to certain functions (articles, prepositions vs. verbs, nouns).

The original usage of stopwords in search engines was to improve index performance (query matching time and disk usage) without degrading result relevancy (and possibly improving it!). It is common practice for search engines to employ stopwords; in fact Solr (http://lucene.apache.org/solr), the search engine behind SearchWorks, has English stopwords turned on as the default setting. We had no compelling reason to change most of the default Solr settings.  Thus, since SearchWorks's inception we have been using the following stopword list:

What follows is an analysis of how stopwords are currently affecting SearchWorks, and what might happen if we restore stopwords to SearchWorks, making every query term significant.

We believe that restoring stopwords to SearchWorks could improve results in up to 18% of the searches, and will degrade results only in the small number of searches with more than 6 terms.

This is strictly query strings; it does not include facet values or other parameters.  Here is a histogram showing the number of terms in our queries for October 2011.  Note that single term queries are split into "alphanum" and "numeric". 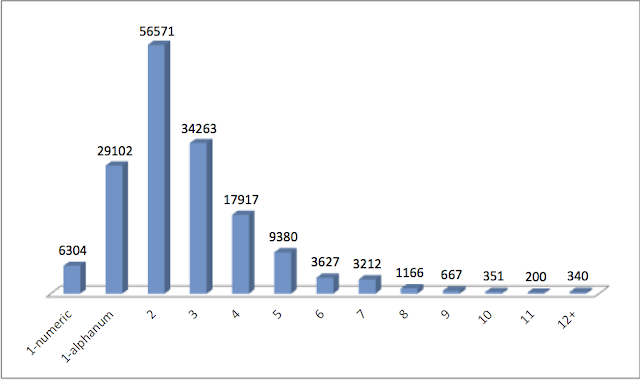 Source: (from Google Analytics for Oct 2011, analyzed by Casey Mullin)


What Percentage of Query Strings have Stopwords? 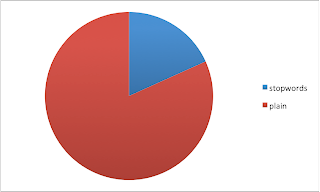 
Do the Stopwords Currently Used in Queries Imply the Users are Trying Boolean Searches?

The 10 stopwords appearing most often in queries are (for November 2011):


or and not do not appear in many queries, while and is not the most frequent stopword, nor close to it in occurrences. I interpret this to mean stopwords in queries are NOT intended as boolean operators.


What About Minimum Must Match?

Restoring stopwords could hugely degrade precision, since stopwords occur so often.  Solr's mm setting (minimum must match) gives us a way to mitigate this problem.  In our index employing stopwords, our mm threshold is 4:  queries with up to 4 terms must match all 4 terms;  for 5 or more query terms, 90% must match.   Given that over 90% of queries have 6 or fewer terms, 6 seems an appropriate threshold for an index that includes all words.

As it happens, increasing our mm threshold was proposed a while back, distinct from the idea of restoring stopwords to the index.


What is Improved by Restoring Stopwords to the Index?

What is Degraded by Restoring Stopwords to the Index?

What Else Have Testers Reported?

Everything is Imperfect.
The back end algorithms for determining what results match a query will always be fairly opaque to the end users - the algorithms are complicated. Moreover, users will have typos and other mistakes in their queries no matter what we do, and it seems unlikely we can consistently rescue them from themselves.

Everything Can be Changed.

Solr gives us incredible control over our search engine's algorithm. There are many many knobs we can twiddle in our quest to improve the relevancy of search results. A few of the possibilities include:


So Where Are We Now?

The data is in, and a decision will be made soon.  I'm guessing stopwords are going to be left in our past.
Posted by Naomi at 8:13 PM No comments:

Have you ever wanted to put a comment on the same line as a cucumber step?


It just occurred to me that I could create a step definition to allow this:

If your text could include escaped quotes, you can use this step definition:

As many of you know, SearchWorks is Stanford's Blacklight instance providing a "next generation" User Interface for materials at the Stanford Library.  What follows is a document I wrote for internal use so that motivated staff could provide feedback in the form of cucumber scenarios.  This blog post might make more sense in the context of my presentation at Code4Lib 2011 ... but this seemed a worthy blog post nevertheless.  Don't be put off by the length - a lot of what follows is examples.

How to Write SearchWorks Search Result Expectations as Cucumber Scenarios

Sometimes we ask folks to check something new in SearchWorks. (thanks for your help!)
Sometimes people notice problems and report them: via the feedback form (thanks!), or a direct JIRA ticket (thanks!) or via email (less optimal, thanks!)
Occasionally people tell us specifics of something that is working "correctly."
When you ask yourself questions like these, then you are doing a "manual" test:
Whenever you test something ("manually") in SearchWorks, we would like to capture your expectations as a cucumber scenario so we can run the test repeatedly and automate it.
Benefits:
Sadly, this does not mean we can make all tests pass – sometimes, we can't achieve the ideal. There may be unacceptable tradeoffs, or it might just be too difficult technically to warrant pursuit. We do have a way to hang on to tests that should pass but are not passing at the current time, so these sorts of tests are welcome as well.
We would still like JIRA issues filed for FAILING cuke tests, and the JIRA issue identifier put in the scenario description.
The tests are easy to write.

Here are some sample cucumber scenarios:
There are more samples at the bottom of this page.

We use Cucumber (http://cukes.info) to automatically test the behavior of SearchWorks. It matches specific language in the "scenario" (cucumber parlance) with actions to perform, like filling in the search box, and then hitting return. Or clicking a facet link. Or going to a particular record to ensure information is properly displayed.
Cucumber does string matching (using regular expressions) to turn the natural language expressing expected behavior into executable test code. But you don't need to worry about it - just follow the specific language rules and you'll be supplying tests to the grateful engineers.

Each cucumber test is called a "scenario." It can have multiple actions taken, and what is displayed after each step can be examined. The idea is to capture how you're interacting with the web page (clicking buttons, selecting from pull downs, typing in text boxes) and what you expect to be displayed.


Be as precise as possible, BUT

We want the tests to be as useful as possible. Relevancy of search results can sometimes be as clear as


Try to leave wiggle room for changes to our collection.

If a test is too rigid in its expectations, then small changes can make the test fail. These are the sorts of questions that help determine if the test is too brittle:

(Step Definition Code for the following is available at
http://www.stanford.edu/~ndushay/code4lib2011/search_result_steps.rb)

All Scenarios must start:

All Scenarios must start:

You're At Your Starting Page; Now Do Something.

Fill in a Text Box

Selecting from a Pulldown

Look at What You Got Back