CJK with Solr for Libraries, part 11

This is the eleventh of a series of posts about our experiences addressing Chinese, Japanese and Korean (CJK) resource discovery in SearchWorks, the Stanford University Libraries "catalog" built with Blacklight on top of our Solr index.

Let's recall the list of blocker, must do, and should do problems that cropped up with level 2 evaluation of CJK discovery in part nine (after relevancy tweaks for edismax applied per part six, Solr fieldtype for text_cjk defined in part seven):

Blockers:
Must Dos:
Should Dos:
The first two "Should Do" items are what I'll discuss here.

As I stated in the first post of this series, cataloging practice for Korean for many years was to insert spaces between characters according to "word division" cataloging rules (See http://www.loc.gov/catdir/cpso/romanization/korean.pdf, starting page 16.)  End-user queries would not use these spaces.  It 's analog ous to spac ing rule s in catalog ing be ing like this for English.

My trusty Stanford-Marc-Institutional-Memory guy, Vitus Tang, assured me there had been no practice, at least for us, to introduce extra whitespace into our Chinese or Japanese data.  Only Korean got the benefit of this ... er ... interesting ... approach.  Here's an example of a record with extra spaces in its title (which I have emphasized with red):

Here's the particular 880 field with the four spaces in the linked 245a (also emphasized with red):

And here are the specs for how we'd like it to work: 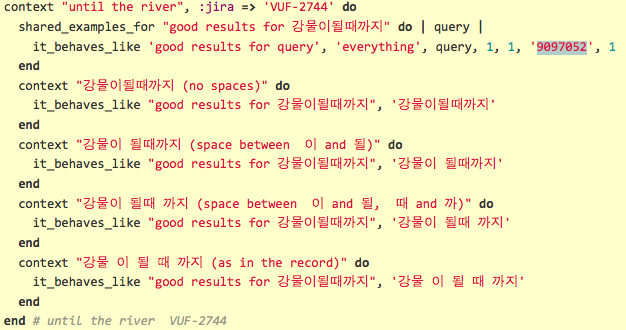 Our full specs for Korean spacing issues are here: https://github.com/sul-dlss/sw_index_tests/blob/master/spec/cjk/korean_spacing_spec.rb.

Vitus Tang had a great idea for addressing the information retrieval problems introduced by these extra spaces: what if we indexed the Korean text as if it didn't have spaces?

Removing spaces from a string before analyzing it was a perfect case for a pre-tokenization character filter, PatternReplaceCharFilter.  This is a tricky regex because it requires lookahead - you have to go past the space to see if it should be removed.  To make it easier to follow, for now we will refer to a Korean character as \k and whitespace is \s, per usual regex predefined character classes.  The lookahead construct is (?=X), so we get:
to remove any whitespace between Korean characters.

Sadly, though, we're not using java 7;  we're using java 6.  Java 6 regular expressions don't allow Unicode script names as character classes, so we have to use Unicode character classes.  This means
becomes
and
becomes the awful (reformatted for readability) 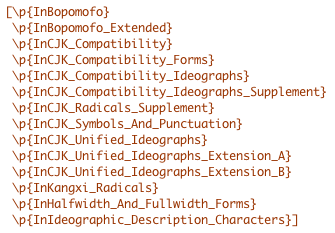 Yuck.  You can look at the resulting char filters in our Solr schema;  I won't include them here.

When we put these charFilters in the analysis chain, like so

Similarly, there are Chinese Unicode variants of traditional characters in our data (and in user queries):

So we want to improve recall by adding some characters to the ICU transform from traditional Han to simplified Han.  However, at the time, Solr only worked with the ICU System transforms.  I didn't see an easy way to alter the ICU transform, but knew I could write a Solr filter that I could add to the analysis chain to accomplish our goal.

The specs for which characters to include came from our East Asia librarians.  Most of the source characters are from Japanese modern Kanji, but there are also some Chinese traditional Han variant characters not covered by the ICU transform.  This approach was made far less daunting when I told the librarians that we could add in more characters at any time -- they didn't need to provide me with a comprehensive list from the get-go.

One note:  for a CJK-illiterate such as myself, the pattern recognition on similar CJK characters is not great, especially for traditional Han script characters.  It was really helpful when the Unicode codepoint was provided, in addition to the character in question.  I ended up doing a lot of web lookups of codepoint to character and vice versa.

The same wonderful folks at http://solr.pl who created the pie chart visualization of Solr scores have two blog posts on writing Solr filters.  Their first post is about writing one for Solr 3.6; their second post is for Solr 4.1.  By the time I was implementing this, we were at Solr 4.4, but I found both posts useful, as well as various other sources I bumped into via Google.

Conceptually, what we want this filter to do is very simple:  when ever it encounters characters with particular Unicode codepoints, substitute different Unicode characters, such that the end result is that the original character, when passed through our entire analysis chain, will match the equivalent (simplified Han/modern Kanji) character.  The code for this Solr filter, complete with test code, jars for testing, and ant build scripts, is at https://github.com/solrmarc/CJKFoldingFilter.

The source code itself is very small.  We need a factory class that extends org.apache.lucene.analysis.util.TokenFilterFactory: 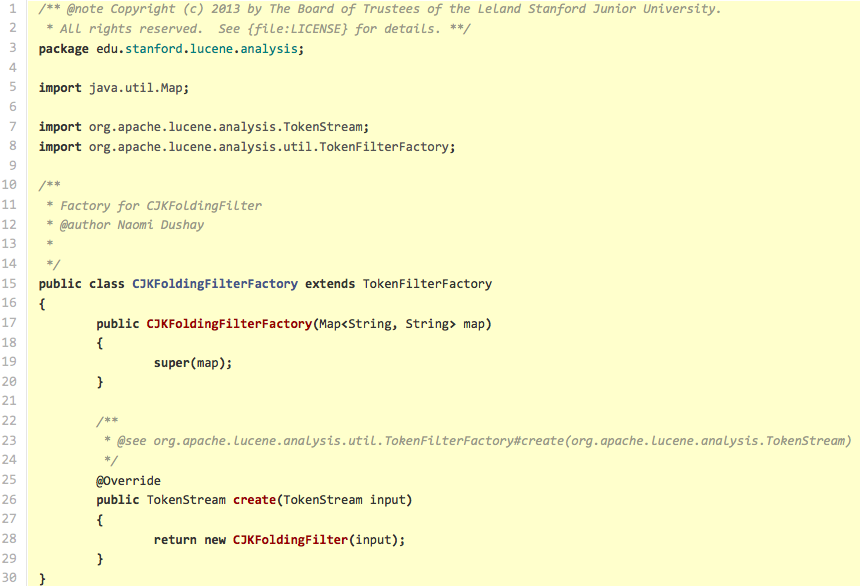 and we need the filter we defined to extend org.apache.lucene.analysis.TokenFilter.   That code is a bit long to include inline, but you can see it at src/edu/stanford/lucene/analysis/CJKFoldingFilter.java in the CJKFoldingFilter project on github.  The core of the Filter code is a simple mapping from each variant codepoint to another codepoint:

Note that I deliberately wrote the tests with a different notation, to hopefully catch any transcription errors:

In addition to various jars needed for testing, I found I needed some additional testing code to get my tests to work.  I figured this out by modeling my tests on what was in core code, and having the compile or execution output indicate what was missing.  All the additional teseting code is in test/src/org/apache/lucene/analysis/util/BaseTokenStreamFactoryTestCase.java, which I shamelessly copied from the Lucene 4.4.0 analysis/common/src/test folder.  The code I copied even has these cryptic comments:

Presumably this oddity has been addressed in a later release of Solr.

In any case, the CJKFoldingFilter I wrote passes all its tests, and when the CJKFolderFilter jar file is added to the Solr lib directory (the same place where all the icu jars go), and the filter is added to our fieldtype analysis chain:

all our Japanese and Chinese variant character tests pass.

It is crucial to note that CJKFoldingFilter must be added to the analysis chain BEFORE the ICUTransform from Traditional Han to Simplified Han.

You may have also noticed that this is the final version of the text_cjk fieldtype definition - it is what we are currently using for production SearchWorks.

Future post(s) will cover getting CJK queries working with the SearchWorks advanced search form, accommodating variant quotation marks for Solr phrase searching, and an mm tweak I snuck past you in part ten of this series.
Posted by Naomi at 3:37 PM